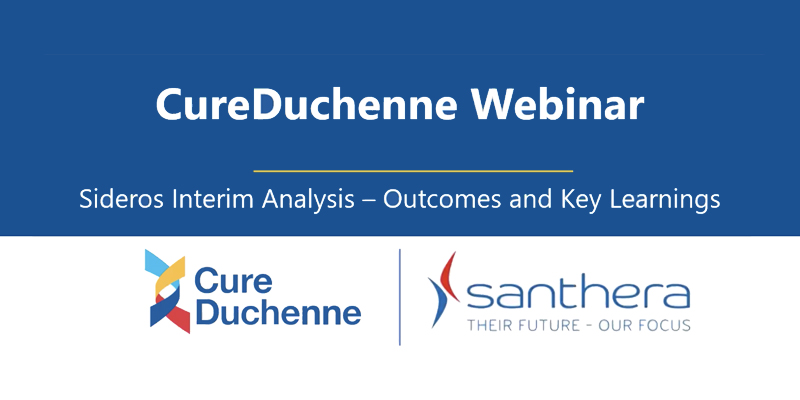 In October 2020, Santhera Pharmaceuticals announced the disappointing news that it was discontinuing its Phase 3 SIDEROS trial of Puldysa (idebenone) in Duchenne muscular dystrophy.  The data from a pre-planned interim analysis concluded that the study was unlikely to meet its primary endpoint (which would be absolutely necessary in order for the drug to be approved).   Therefore, Santhera decided to stop the trial.

Santhera’s Chief Medical Officer, Kristina Sjöblom Nygren, MD, recently held a webinar together with CureDuchenne, to present the data that led to that decision and answer questions from the community.

Dr. Nygren opened the webinar by describing that interim analyses are used to make decisions about a clinical trial while it is running, without compromising the integrity of the trial.  The pre-decided statistical analyses are conducted by independent experts who then communicate their findings to the sponsors of the trial.

In the case of the SIDEROS trial, the analysis done by the independent board was to determine which of the following outcomes the data indicated:

For SIDEROS, the interim analysis indicated that the trial had less than a 4% chance of being successful, so the trial was stopped.

News like this always brings disappointment to the Duchenne community.  Many families, clinicians, and researchers put a lot of time and effort into a clinical trial, with the hope for a successful outcome.  Although it is most ethical to not continue a trial with such low chance of success–especially given the sacrifices families make to participate–it doesn’t make the news any less hard to hear.

CureDuchenne thanks Dr. Nygren and Santhera for taking the time to present their findings with the community directly, and their continued commitment to publish their findings for larger benefit.

You can advance the care, treatment and cure for Duchenne muscular dystrophy. Contributions in any amount can truly make a difference and can be credited to a fundraiser or event from the list below.

Our Spring Sale Has Started

You can see how this popup was set up in our step-by-step guide: https://wppopupmaker.com/guides/auto-opening-announcement-popups/